Basic Network: What is Network, Protocols and Topologies

Hello everyone with a new blog post! As of 2023, I am continuing the series of blog posts that I have been taking a break for a long time. I am here with the first article of the series consisting of 3 blog posts that we call Network Basics, I wish you good reading in advance.

The first thing we need to know before moving on to network basics is what a network is. So what is Network?

Network is the connection of multiple devices to each other in order to share resources. Network enables sharing of resources between devices in software or hardware. For example, if we take examples from a company network, in an office environment where there is no network, an external storage device is needed to transfer the software resource to another computer. Thanks to the network, this need is met by the reliable and fast transmission of the software resource on a common network where computers are connected without the need for an external media or storage device. Of course, this is a very simplified example of file transfer.

Another way of looking at it is that in environments without a network based on hardware resources, people still need an external media or storage device to transfer the files they need to hardware devices. Thanks to the network, for example, the output you want to get through a printer is very simple and the network can quickly provide you with a solution thanks to the hardware resource support of the network.

I will cover them in detail later, but I wanted to mention them briefly for the sake of knowledge. So, we have learned what we need to use to connect two or more devices to each other. However, we also need to know the protocols necessary to establish communication between devices. So let’s continue with our next topic, Network Protocols.

What is a Network Protocol?

As everyone knows, people around the world need to know common languages in order to talk to each other and transfer information to each other. Network also works in this way. The network enables communication between two devices, just like people, but first the two devices must be able to speak the same language. Devices in the network can only communicate and transfer information with each other if they use common protocols.

I will examine this issue in the OSI Reference Model, which I will cover in detail in my upcoming blog posts. Let’s continue without slowing down and move on to our next topic, What are Network Topologies?

It is the topology that determines how devices in a network are placed, how they are connected and how they transmit data. Today, it is used in two different ways. It is divided into two as Physical and Logical topology.

What is Physical Topology?

What is Logical Topology?

Today, the most widely used and known Network Topologies are the design models developed on five sequences. These models are used by network and system engineers in the required environments. 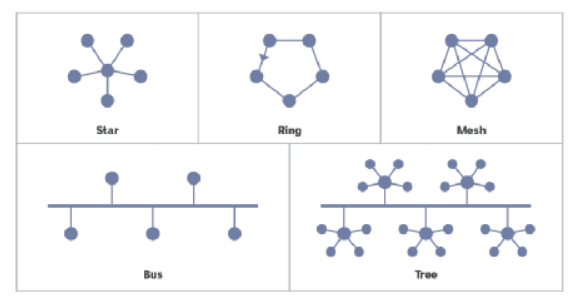 As you can see in the picture, 5 different network topologies are shown. These are

They are network configurations named as. The topologies here have pros and cons compared to each other. Let us examine them in order.

This type of topology is very popular as it can be easily installed on the network. In addition, when an additional device is desired to be connected to the network, it can be easily added. It is economical, and it is possible to create a network without the need for external network devices such as switches or hubs.

In addition, in this topology, it is difficult to detect failures or errors in the systems installed on the backbone. In addition, when a problem occurs on the network, all devices connected to the network are affected. The data transfer rate is also low.

As with the bus topology, there are some advantages and disadvantages here.

The advantages are that all devices on the network have the same authorization and there is little performance degradation if a device is added to the network.

As disadvantages, a malfunction that may occur on a device connected to the network may cause the entire network to become unusable. It is also a very costly topology.

Star topology consists of a hub or switch in the center and devices connected to it. In this topology, the data is logically sent to the hub or switch before the device from which the data originates. Then the data is transmitted to the destination device.

In this type of topology, network management and problem detection is easier, and it is also easy to add new devices. The biggest difference compared to the topologies I have mentioned so far is that a problem occurring in the destination or sender device does not affect the network.

As disadvantages, a problem in the intermediary network device in the center affects the whole network. It also requires more cable connections.

The advantages of this topology are that it is easy to reach each device and the segments they form. The device boundary of each intermediate topology is limited by the cable length. When backbone cables or central devices fail, the network is disrupted. It is difficult to install and organize.

After examining our last topology type, Mesh, we have finished the topics I planned for our first blog post today. Hope to see you in my next blog post.