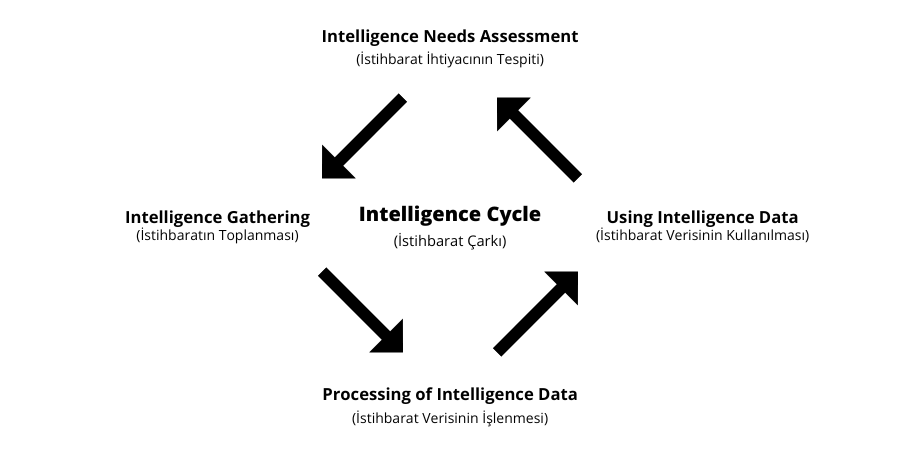 In this article, the four basic items in the Intelligence Cycle and their in-depth explanations are given. Türkçe versiyonu için tıklayınız.

What is the Intelligence Cycle?

What is the Intelligence Cycle? As can be seen in the example I added above, the intelligence cycle means the regular and systematic processing of the data obtained through intelligence. This cycle has an endless loop and an operation that constantly renews itself. In addition, intelligence activities are studies that continue uninterrupted. For this reason, many different institutions, basically similar to this methodology, have many different methods of processing intelligence data. However, it is necessary to examine them in 4 main branches:

In addition to open and accessible sources, the data obtained by intelligence agencies by applying different methods and methods during the “data collection” stage are also referred to as closed intelligence data. Well, let’s take a look at what needs to be done after collecting the data.

• Processing of Intelligence Data: The third phase of intelligence includes the processing and evaluation of data collected in the previous phase. When collecting intelligence data, we divided it into two parts. This filtering method allowed us to divide the data into two different categories, Open and Closed. The next method for categorizing data is the appraisal and classification part. In this section, the accuracy of the data is first questioned. The data verified by various sources belonging to the institutions are evaluated as to what kind and to what extent it can be used upon incoming demand. To explain in detail. Classification is the first part of this phase. In the evaluation of the data, similar data are brought together thanks to the classification process. Another step is to evaluate the data, in other words, to evaluate it. In the valuation phase, similar data are graded by various methods according to the accuracy and trust of the source. In the last stage, the obtained data is interpreted. As I said at the beginning of my article. Intelligence drives reasoning and achieves results. And so the final phase is passed.

• Using Intelligence Data: In the fourth and final phase of intelligence, there is the use and publication of data that we have evaluated and interpreted in the previous phase. If we take a scenario-based example, after the data obtained as a result of such a cycle is interpreted, based on the necessary analysis and methods, it is transmitted to the institution requesting the intelligence data. Although we seem to have reached the end of such a cycle, we are returning to the first step in the opposite way. That’s why the intelligence cycle is endless. It has a structure that constantly renews itself.

Click to read the third part of the article, Basic Principles of Intelligence.